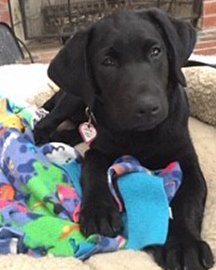 Scott Magill, a long-time Bellingham resident, has been using his musical skills to raise money for local veterans and disabled children. After performing locally for several years, Magill has recently decided to transition to donating 100% of his tips through Neads.com, a charity that specializes in pairing service dogs with disabled children. So far, he has raised over $5,000 for this cause, enough to name two puppies in training. The first was named “Josy” (pictured left) after Joseph Murzycki, a Bellingham veteran and great-grandfather to Magill’s children. The second puppy hasn't yet been named, but Josy was able to graduate into service and has now been placed with a young boy.
For the last few years, Magill has been performing for tips at restaurants and bars. Originally, he kept the tips he earned for himself, but he realized that the amount he was earning was minimal. So, he decided to simply donate whatever he made each night to a local charity, and this made all the difference. He discovered that he was earning much more in tips now that the money was going to a good cause. He realized that people would be more willing to give if they were giving to charity, not just to him. He capitalized on this by expanding his platform to accept digital payment and by creating a presence on social media.
When asked about his origins in music, Magill explains that his skills were self-taught. In his younger years, his focus was on sports rather than music. However, after college his interest in music grew until he finally decided to pursue it. He tells a story about wandering into a music shop with a friend while waiting for a pizza. After returning home with the pizza, he told his friend, “I’m going back for that guitar.” Years of dedication and practice later, Magill is a skilled guitarist and vocalist. He describes himself as a “top 40 acoustic artist.”
If you are interested in seeing Magill live, he performs at bars, restaurants, and breweries here in Bellingham as well as in Franklin, Milford, Cumberland, Whitinsville, and other towns. Go online and visit ScottMagillMusic.com for his social media links, gig schedule, and song list.
The pandemic has had a big impact on live music, but Magill is back on stage. If you go out to see and support him, don’t forget to tip—you’ll be helping train a service dog while having a good time!