On November 11th, Bellingham Library was packed to the brim as residents took seats to celebrate the veteran heroes of our nation, including our local veterans. At 11:00 AM, the colors were presented by the Blackstone Valley Young Marines. Attendees placed their hands over their hearts as Robert Oliver beautifully sang our National Anthem, and the Bellingham Scouts led everyone in the Pledge of Allegiance.

Jim Hastings began with opening remarks, speaking about how wonderful the Young Marines program has been for our youth and citing an example of a local who is now serving in Belgium as a Marine security guard after going through the program. He thanked PJ’s Bar and Grill for donating food to the event and briefly introduced the panel. He asked if all the veterans could stand, and they were honored with a resounding applause. He introduced Pastor Baron Rodrigues from the First Baptist Church, who then led the invocation, asking the group to pray with him as he asked God to bless the ceremony; he expressed thankfulness for the men and women who have served to protect our freedom and gratitude for the patriotism of our town and asked blessings upon everyone in the room. This was followed by a welcome from library director Bernadette Rivard, who thanked everyone for attending in such abundance, spoke about the tradition of the ceremonies held, said that the library was honored to host the program once again, and thanked Jim for doing such a wonderful job of organizing the events.

Hastings then introduced US Navy veteran and Bellingham native Mark Lacasse, who also happens to be his nephew. Hastings quipped with a smile that he had attempted to recruit Mark to the Marines, to no avail.  Lacasse shared stories about his experience in the Navy and mentioned that though he had not considered the military when he was young, it was one of the best decisions he ever made in his life. Having been deployed to protect the Abraham Lincoln aircraft carrier, and having served two tours to the gulf and one to Canada, he noted that it isn’t always war time when they are deployed and that the Navy also helps people in need. There were times when they would get distress signals and once got one from an Iranian fishing vessel, which they were able to aid. He closed with a quote by John F. Kennedy, who said that he could “imagine no more rewarding a career, and any man who may be asked in this century what he did to make his life worthwhile, I think I can respond with a good deal of pride and satisfaction, that I served in the United States Navy.” Lacasse said that he applauds anyone who makes the decision to join as well.

Tom Lane, US Navy veteran and new post commander of our local VFW, was next to the podium.  Hastings commended Lane for the work he has done for the VFW in the past year, mentioning that it probably would have had its doors closed if Lane hadn’t been so astute and kept it going. Lane gave a brief history of his military experience, having joined the Navy in 1965, and mentioned that though he volunteered to be sent to Vietnam, it was only after he was married and stopped volunteering that he was sent there for two tours. He said he “wouldn’t trade a minute of it for anything.”

Lane then spoke about the mission of the VFW, that though traditionally people think of it as a smoke-filled bar where veterans share war stories over drinks, it is so much more. Now smoke free, the Bellingham VFW encourages people to gather and socialize, but their main purpose is to support veterans in distress throughout our community. This could be anything from repairing a vehicle to paying a bill during hardships. He mentioned that most veterans aren’t likely to ask for help, so he encouraged attendees to let them know if they knew of any veterans needing assistance. He also mentioned that the VFW sponsors local sports teams, has a hall for various functions and offers scholarships; and he called it “not your grandfather’s VFW.” He closed by thanking veterans for the freedoms that we all enjoy.

Guest speaker Lieutenant Colonel Alex Babington, a US Army veteran and Military Deputy for the Combat Capabilities Development Command Soldier Center at the Natick Soldier Systems Center, took the microphone after an impressive introduction by local US Army veteran and educator Sam Cowell.

LTC Babington asked the veterans in the room again to stand up and be recognized; then he joked that he can always pick out the veterans because they get up the slowest, thanked them and their families and asked family members and D.O.D members to also stand. He thanked the town of Bellingham for allowing him to be a part of the event to honor veterans and quoted former President Calvin Coolidge, who said that “a nation which forgets its defenders will be itself forgotten.” He then said that we don’t have that problem in America and that the attendance there that day was a testament to that.

“This is a time to pay tribute to all American veterans who have served this country honorably during war or peace time. These women and men who have fought for freedom and through their service and sacrifice have guaranteed our liberty and way of life,” said Babington.  “Their sacrifice has provided an environment of security and freedom on which the nation has grown and flourished – America has long been a beacon of hope and freedom to others.”

He spoke about what led to the declaration of Armistice Day in 1919, which later became Veterans Day in 1938. He talked about the fully mechanized conflict with machine guns, barbed wire and chemical warfare of World War I and its aftermath, with an estimate of over 20 million deaths, making it one of the deadliest conflicts in history. Though it was said to be “the war to end all wars,” we have seen more that have followed. In World War II, 16 million American soldiers stepped up to help end tyranny. The need for skilled and dedicated military personnel is a necessity to protect our shores and help in some foreign conflicts.

“That is the story of the American veteran – ordinary women and men who stepped forward to purchase our independence with their service and to help others who have felt the oppression of tyranny,” Babington said.  “On the windswept beaches of Normandy, on the frozen ground of Korea, in the sweltering jungles of Vietnam, on the sandy deserts and high frozen mountains of Iraq and Afghanistan – and during all years of restless peace in between conflicts, today we remember them all.”

He said that once someone is a soldier, they are a soldier for life and they bring all of the values and skills they carried in their years of service to civilian society when they return, and enhance their communities with the services they provide, whether that be as teachers, doctors, engineers and more, offering inspiring contributions.

He closed by reading the poem by an unknown author entitled It Is the Veteran and thanked everyone again for having him as a guest.

Following Babington’s moving speech, Jim Hastings presented plaques from the committee to all of the speakers in appreciation of their participation and service. 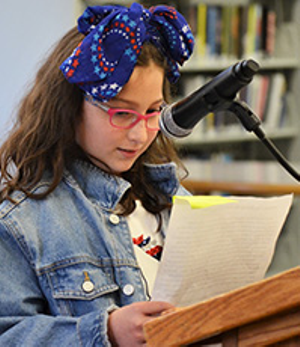 The audience was then delighted to hear from the top three winners of the Bellingham Memorial Middle School Veterans Day essay writing contest. Bellingham resident and former educator Lori Fafard explained that 5th grade students were asked to share information on what Veterans Day meant to them and why they thought it was special. 54 essays had been received and judged. The winning students then read their essays for the crowd. The essay contest winners this year were First place: Antonia Gagnon (pictured left), Second place: Olive Cowell, and Third place: Ian Silva. Robert Oliver then returned to the podium to sing a lovely rendition of “God Bless America.”

State Representative Mike Soter then spoke, commenting on how proud he is to be a part of the Bellingham community and noting the amazing support of its residents. He talked emotionally about an influence that he had had in his life which spurred him to want to become a politician. He spoke of traveling quite a bit on business, and once when he had a delayed flight, he went into an airport restaurant and met a soldier whose father had been in Vietnam; the soldier happened to mention that he was concerned that when he came back from his deployment he would be treated as his father had been  when he had returned from war. Mike said that it occurred to him that there was a common disappointment in the government and that they so often say a lot of words and do little action to support returning veterans.

A year or so later, he was passing again through the airport and came across that man again; and the man had, sadly, lost his legs in battle. A teary-eyed Soter then explained to the crowd that “what veterans serving in our military do for our country is the most powerful thing you can do, and we should never ever let them walk alone.” He made the promise that “every day that I sit here in this office and any office I will ever have or even if I am not in politics, I will not let you walk alone; thank you so much for serving our country and fighting for the freedoms we have.”

Soter then honored Sal Pilla, a local Army veteran who served in WWII, and a well-loved retired firefighter in Bellingham, who, sadly, passed away this year at the age of 100. Soter recalled meeting Sal and commented that his nickname of “Scrap Iron” was well given. He then called up the panel and read a proclamation of the House of Representatives recognizing Sal’s service to his country and community. The proclamation was presented to John Pilla, Sal’s son. There is a plan to dedicate a memorial square to Sal in the near future.

Everyone stood as the United States Armed Services Medley was played, followed by Pastor David Mullen of St. Brendan’s Church, who commented on the need to support our veterans who are sometimes badly affected by PTSD and thanked those who help care for veterans in need. He closed in prayer, asked God to gather all veterans in heaven and greatly reward them, to watch over the veterans who are still here, and for healing where it is needed.

After the ceremony, guests moved outdoors, where there was a moment of silence before “Taps” being played by Paul Thibeault, US Army veteran, and the laying of a commemorative wreath on the flagpole by the speaker panel.