Residents of the Children of Kilimanjaro Orphanage (COKO) 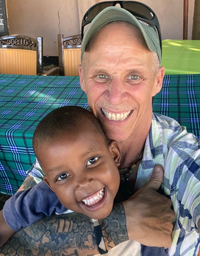 An orphanage founded by Bellingham native Jay Rowe cares for 25 children (ages 3–9) in the small city of Moshi in the East African country that borders Kenya. Known as COKO (Children of Kilimanjaro Orphanage), the facility opened on March 15, 2020, just about when the COVID-19 pandemic started.