by MARJORIE TURNER HOLLMAN, Contributing Writer
Bellingham Police officers teamed up with state troopers from the Troop C Community Action outreach team, along with members of the mounted police and a K-9 officer, for a “Coffee with a Cop” community policing outreach program. State troopers took their animals to Dunkin’ Donuts in South Bellingham (next to Charlie’s Tire on S. Main Street) to join Bellingham’s officers for an outdoor meet-and-greet on a sunny April morning. The state police had brought plastic state-trooper hats for the kids. The bomb-sniffing dog, Pippin, and the two mounted police with their horses got lots of attention from the crowd of visitors who showed up throughout the morning. 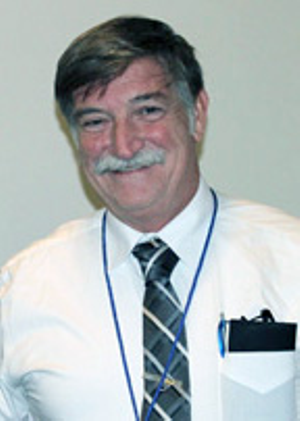 Bellingham Detective Amy Kirby had organized the program, along with Trooper Farah Gray, and Chief of Police Gerald L. Daigle, Jr. (left) gave his approval of the effort. Their goal was to promote kindness. Kirby explained, “This is a national program of community outreach.” Bellingham officers who participated in the program also included Sgt. Steve Daigle (no relation to the chief), Patrolman Mark Auld and Sgt. Tom Marston.

Pippin, the yellow Lab, with her handler, Scott Irish, drew a lot of interest. Visitors had questions for Trooper Irish, such as “Does the dog get scared?” The answer‚ “No, she loves her work.” Irish explained that since Pippin is a small size for a Labrador Retriever (55 pounds), she is able to get into tighter spaces to check for possible explosives. He also explained, “Pippin doesn’t bark when she smells something; she sits and looks at me‚Äîit’s how we trained her to alert us that she has smelled something.” He noted that Pippin began life with the “Puppies Behind Bars” dog-training organization for socializing puppies with prison inmates (https://www.puppiesbehindbars.com). “We get great dogs out of that program,” Irish said.
Troopers William Newton and Giuseppi Ciampa had brought their horses to the event. Newton noted that he grew up on a farm in Norfolk and has been a trooper the past 16 years. “Being a mounted police officer was something different for me,” Newton explained. “I grew up around animals and am the primary caregiver for Amadeus. I feed and groom him and clean out his stall. Together we patrol state parks, rail trails, and state beaches. We sometimes get called out for searches in rural areas. Presently we have seven members of the mounted police, but we will add to that number in the summer.”
Children crowded around Pippin, and were a lot more careful around the horses—these are large animals! After meeting the state troopers and local police officers, many headed into Dunkin’ Donuts for a treat. Because the program was held during school vacation week, parents welcomed a free, kid-friendly event for their children to enjoy.
“Between COVID and a shortage of officers, there aren’t that many opportunities lately for community outreach,” Daigle said. “This one gives people the opportunity to speak with officers face to face and, hopefully, develop a rapport with them so that they don’t feel fearful of police.”
“It’s tougher now to do outreach programs like this because of a reduced workforce,” Daigle explained. “We’re 5 officers short—actually 9 short from the department’s peak of 33 officers. I still have Len Gosselin and Doug Houston going into the schools with the DARE program, but we had to cut the outreach program for seniors.” He said he has 4 officers attending the police academy who will graduate in October and that, so far, the shortage of officers hasn’t led to any tragic situations. But as Daigle pointed out, the population of Bellingham continues to grow.
The chief said that even if the funds were available to hire more officers, he’d likely still have problems filling positions. “Because of the push for reforms [like efforts to end qualified immunity for police], cops are wondering where the profession is headed and if they’re going to be sued,” he said. “It’s dangerous because that may cause hesitation in certain situations.”
He did agree that reform is coming, saying, “Are all cops angels? No. But for the most part, we have a good relationship with the people in town; they support us, they drop off food at the station, etc. The politicians who are crafting these reforms, however, haven’t been out there on the streets and don’t know what we’re facing.”
When asked about body and cruiser cameras, he replied, “Technology costs money. And at this point, I can’t even get cops, never mind equipment.” He noted that years ago, they had cameras in the cruisers, but the weather played havoc with them, causing screens to freeze, low quality, etc.
Daigle has been Bellingham’s Chief of Police for over 20 years. When asked if he had any retirement plans on the horizon, he said he tentatively plans to stay on for two more years. “I’d like to usher the department through whatever reforms are coming,” he said, “but you never know what will happen.” He has been focusing on updating department policies.
Planned with relatively short notice, word about Coffee with a Cop went out through social media and kept the cops who were hosting the event busy throughout the morning. Having a sweet cuddly dog who loves to get patted, along with well-groomed horses to draw even more crowds, added to the fun.
Well done, Bellingham Police Department. Thanks for bringing such great law enforcement partners to town for children and parents to enjoy.
BPD Community Outreach [2 Images] Click Any Image To Expand