Construction of Bellingham’s new police station on Blackstone Street is nearing the halfway mark. The $6.8 million facility (depicted at right), which was approved last year at Town Meeting, is taking shape rapidly and appears to be on schedule to be up and running next June. The station is a one-floor building that includes 40 rooms over 13,636 square feet.
So far, completed work includes the foundation, footings, walls, roof trusses, concrete for a radio antenna, a parking canopy, sewerage tie-in, water connection, some landscaping, a stone wall near the senior center and asphalt paving. “We’re at about the 45 percent mark,” said Gerry Daigle, who’s been the town’s police chief for 14 years. “To see the project progressing is really exciting because we’ve talked and planned for this for a long time.”

“There’ll be a good-sized lobby with public restrooms and a waiting area nearby,” Daigle said. “Off to the right of the lobby will be a conference room that can be used for training sessions or public meetings. There’ll be desks there for use when seminars or any kind of training occurs. The cell block area will consist of four rooms, and they will include two male holding cells, one female holding cell and one which will be a female/juvenile holding area. Four is a number that will meet our needs. Franklin, which is a much bigger community and police department, has seven cells and some of them are used for storage. So I feel comfortable with the number being four. A detention area will be used for booking, holding and bail procedures.”

The middle portion of the building will include space for detectives, court officers and communications. “There will be a more efficient flow of our daily operations,” Daigle said. “I’ll be able to have a good view of everything. I won’t have to run to two different buildings. A gym will be an excellent addition for any officer eager to work out. All the equipment in the gym will be at no cost to taxpayers because it’s being provided by the Bellingham Police Association. We will just be providing the room. When someone wants to get in a workout, he or she now has to go to the Primavera Center.” 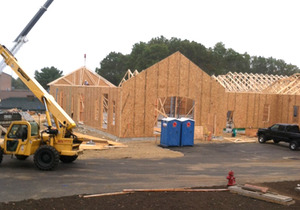 A canopy will protect 16 cruisers on the right rear side of the building, and storage will now be more centralized because each detective will have access to an area to keep records. There will be 30 parking spaces for public use.

As construction moves along, Daigle is on site daily for briefings. He also meets once a week with the contractor, architect and engineers, and he meets monthly with the Police Building Committee to review bills and any changes that may be required. The building committee consists of Joe Collamatti, Denis Fraine, Jerry Mayhew, Mike Soter, James Russell, Kevin Ranieri, Roger Oakley and Daigle. “Mike Soter deserves a lot of credit,” Daigle said. “He was one of the driving forces to get this project off the ground. He went on road trips to get ideas and was very involved.”

Soter is delighted that the new station is on the road to completion. “Four years ago, when I was elected as a Selectman, I said the station should be a priority,” Soter noted. “Originally, the cost was in the $12–15 million range. We didn’t want to raise taxes and we believed we could fit bonding for the project into our debt schedule, and that’s what will occur. A group worked together and we came up with a building for $6.8 million that has all the aspects we need and will meet all requirements as the town grows.”

Daigle said he realized in 1999 that building a new station was a need that was drawing close. “I was dealing with a lot of conditions at the old station that needed attention, and I often had to correct situations that state regulators deemed mandatory, like cell repair, air quality, mold removal and boiler upgrades. They also would hand me a list of suggested fixes, and that list kept growing as the years passed; but we waited our turn while the town built a new library, municipal center, fire station, elementary school and high school.”

Selectmen have not yet discussed plans for the current police station once it’s vacated for the new location. One option would be to demolish the current structure. The Police Administration Building is being considered by the School Department as a possible location for its administrative offices.

The new building can accommodate 35–40 officers. Daigle’s department currently is at 28 full-time officers with a civilian staff of seven. The current station was built to accommodate 14 officers.

“When I leave the force, I can look with pride at the new station and know I played a role in its becoming a reality,” Daigle said. “I started at the old station in the early 1980s and saw a lot of officers learn the ropes in that building, but, as the town grew, it became obvious a new station was necessary. As the new facility gets closer to completion, I think of my family history. The new station is more than just a project. My father and grandfather were DPW directors, my mother was a school cafeteria worker and my grandmother was a librarian. Many in my family have links to this town.”

The architect for the project is Kaestle Boos Associates of Foxboro, and the general contractor is M. O’Connor of West Roxbury. “They’ve done a good job so far and I’m sure that when their work is done this will be good for our officers’ morale and safety,” Daigle said.