"Walking Around the World" Theme of Macy School's Arts Week Jaime Keithline of Crabgrass Puppetry Theatre was just one of the events during Arts Week.

Many schools offer special arts programs, typically forty-five-minute events that have an educational focus with, perhaps, a connection to the curriculum. But Clara Macy Elementary School in Bellingham has a long-standing tradition of celebrating the arts for an entire week near the end of the school year. “Arts Week” at Macy originated with former Principal Annette Packard, who was passionate about the arts herself and encouraged her staff to fully embrace the role of arts in education.

Over the years Arts Week has had different themes, and the format has been tinkered with. But the overall concept of dedicating an entire week of school to the arts has remained intact. This year’s theme was “Walking around the World.”

Maria Eydenberg, art specialist at Macy and Stall Brook schools, has been coordinating Arts Week for the past 23 years. During this year’s Arts Week she took a few minutes to reflect on the week’s events, just before students arrived for class. Eydenberg recalled the tradition of honoring someone during Arts Week who has made an outstanding contribution to the life of Macy School. “Remember when we honored Florence Ames, editor of The Bellingham Bulletin?” she asked. “She was here for every event and got pictures of so much. She was great!” 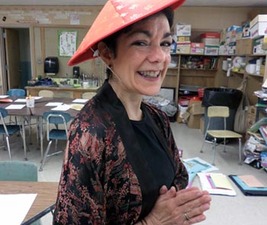 Eydenberg (pictured above) continued, “I dress thematically every year.” She smiled shyly from underneath her cone-shaped hat, which was evocative of Asia, as was her delicately flowered jacket. “We have a kick-off parade each year, and since Mrs. Sandy Rose is retiring after forty-three years of service, this year we wanted to honor her. For the opening day parade I gave Mrs. Rose a sash and a tiara—she was Mrs. Macy. After I made the sash, I got inspired, so I dressed up as Miss Universe [wearing an evening gown, not a swimsuit!]. Another year I dressed as a pilgrim, and a little girl told me she had a pilgrim costume. I encouraged her to wear it the next day and she did!”

Eydenberg said, “I start in January collecting art projects the children make. Each child has at least one art creation on display in the school during Arts Week. I immerse the children in the Arts Week theme. Art is a great tool to teach students history, geography, culture, and expression. My goal for children this age is to get them to love art. They won’t all grow up to be artists, but they can learn to appreciate art. Arts Week is the best week of the year!”

A lot of the artistic expression the students and faculty experience during Arts Week at Macy is homegrown. The Macy Grade 4 chorus performed for the entire school, and the BMMS Band provided a concert. The ever-popular talent show rounded out the week’s events.

The school also enjoyed the skills of Li Lui, who demonstrated amazing Chinese acrobatics that kept the children spellbound. The Crabgrass Puppetry Theatre shared “Fantastic Folk Tales from around the World,” and, after the performance, pulled back the curtain to explain (some) of the secrets of what made the puppets work. Puppeteer Jaimie Keithline described how the different types of puppets were constructed and how the scenery was created, and showed the children some of the tricks he uses to animate the puppets. During the performance Keithline clearly delighted in his work, building suspense and drawing the children into each tale he shared. At the end of the program he explained that while he wasn’t able to travel to Gabon, Greece, and India, the three countries in which his folk tales originated, he could go to the library to learn about them.

Another school year has come to a close, as has another celebration of Arts Week at Clara Macy Elementary School. The tradition continues. There may well come a day when Macy is no more, but the lessons learned and the shared experiences of Arts Week are not soon to be forgotten.